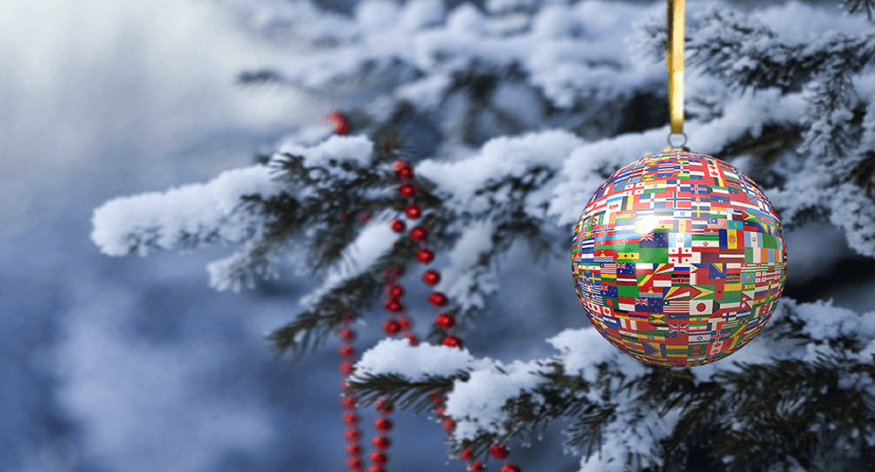 Festive Traditions Around the World

As you may have noticed, for a few weeks now our thoughts have been firmly on the approaching festive period. With a network of more than 150 countries worldwide comprising of our own entities and partners, we thought this was the ideal opportunity to find out what Christmas and December means in different countries.

For this week’s special Christmas article, we asked the Mauve family to share the traditions they love to celebrate at Christmas, and any other festivities that were unique to their home country. Read on for a picture of Christmas across the Mauve network…

Marketing Co-Ordinator Demetra Tofarides comes from a Greek Cypriot family, and told us about some of the festive traditions in the country:

“In my family we always receive one gift on Christmas Eve and it’s always a pair of pyjamas that we wear that night and take our Christmas photos in the next morning!

A unique tradition of the Cypriots/Greeks is as follows – on New Years Eve, every family makes a sponge cake and inside (before we bake it), we insert some money wrapped in tin foil to protect it. Then when we cut into the cake on New Years Day, whoever happens to find the money in their slice is said to have a lot of good luck (financially and otherwise) throughout the year.”

“Traditionally in Cyprus, the local custom is to receive the Christmas presents on New Years Day, as Santa or “Agios Basillis” visits the children on NYE.  I personally can’t wait that long, so we do presents on Christmas day, but my nieces and nephews have to wait!”

She also said that on Christmas Day or at any time of the year, “…if you turn up at any Cypriot house, invited or not, there would be enough food to go round and there’d still be left overs!”

“My Dad always hid one last present for my sister and I somewhere in the living room that we would find as a surprise later on Christmas Day – after all the other presents had been opened. I still do this with my husband 🙂 “

As a British expatriate to Cyprus, Sales Support Lisa Jaques made the most of the ambient weather by comparison to the UK:

“When my girls were teenagers, one of our traditions would be that they would jump in the swimming pool on Christmas Day for a reward of €50.00…- then a family photo in the jacuzzi to send friends/family in the UK!”

Dubai is a Muslim country and therefore does not officially celebrate Christmas. However, due to the large number of resident expatriates, Dubai has welcomed festive celebrations such as winter festivals and markets, and many expatriates attend opulent brunches in hotels across the city on Christmas Day – a modern tradition that takes place the rest of the year on Fridays, the first day of the UAE weekend.

Unsurprisingly, many of the English responses to our enquiries involved a tipple (!) and lots of delicious food. The English typically eat a roast dinner of turkey, goose or other roast meats with vegetables, gravy, Yorkshire puddings made from batter and “pigs in blankets” – small sausages wrapped in bacon. Presents are opened on Christmas Day after a visit from Father Christmas and many families sit down to the Queen’s Speech after lunch – a review of the year from the country’s monarch.

“I don’t have particular traditions with the exception of eating ALL the chocolate! When I was little though, Mum & Dad always said Santa forgot to deliver a present, and he always delivered it on Boxing Day. We had to go hunting for it!”

Business Development & Global Operations Jo Hart will have a Bucks Fizz (champagne mixed with orange juice) and a cup of tea – even at 6am!

“Champagne and Armagnac on Christmas morning whilst opening the stockings, none of this Bucks Fizz nonsense!”

“I spend every Christmas with my family and we always have smoked salmon and cream cheese bagels on Christmas morning with a Bucks Fizz – every year, my mum wears a different Christmas jumper and my dad dresses up in a smart shirt and a flashing/musical Christmas bow-tie…he keeps this on all day – even on our annual Christmas day walk, which can be quite embarrassing!”

Christmas in Colombia is a huge celebration and party, starting on 7th December with Dia de las Velitas, or “Day of the Little Candles”. Houses are covered in candles, lanterns and lights, and there are fireworks displays and dancing. From mid December until Christmas day, Colombians take part in “novenas” where family, friends and neighbours come together to pray in the days leading up to Christmas.

The Christmas meal or “Cena de Navidad” is eaten on the evening of Christmas Eve. Dishes include lechona (pork stuffed with rice and peas), ham, turkey or a chicken soup called “Ajiaco Bogotano”. Other foods eaten at this time of year include arepas (a thick pancake made from corn), hojuelas (a fried pastry with sugar and jam) and a dessert called “Natilla” which is a set custard.

“The ‘Plygain’ is an old Welsh tradition as follows:

In many parts of Wales, Christmas Day meant attending an early plygain between 3-6am at the parish church. It survives mainly in Montgomeryshire and takes place in churches and chapels over a six-week period during Christmas and the New Year. The Plygain is amongst the oldest continued folk traditions in the British Isles. After a short service, the plygain is declared open and the audience takes part in unaccompanied Plygain carols, sometimes as individuals or as small parties of three singing in close harmony.

You can listen to an example of a Plygain carol being sung here by my friend’s three daughters!”

“Always Christmas dinner with lashings of gravy! (as some of you may have noted at the Mauve Christmas party). My parents always used to hold one present back so that when there was a lull in the afternoon, Mam would say go and have a look in the other room and there would be an extra present!”

Sales and Business Development Consultant Ashleigh Duncan may be based in New Zealand but as a Scottish national, she told us about her favourite Scottish tradition of Hogmanay – a celebration of the last day of the year. People wear kilts and participate in traditional ceilidh dancing, and eat “stovies” – described by Ashleigh as a “potato and meat stew thing”!

Many traditions are similar to British due to the countries’ past connections. Christmas takes place in summer and so many South Africans will go to the countryside, go camping, or celebrate on the beach. The Christmas meal usually involves turkey, duck, roast beef or suckling pig with yellow rice and raisins and vegetables. This might be followed by Christmas Pudding or mince pies, or a traditional South African dessert called Malva or Lekker Pudding. If the weather is extremely hot, South Africans may have a barbecue or “braai”.

“As a Catholic country, on Christmas Eve in Italy, we should abstain from eating meat. This is seen as a penitential gesture. Fish is then an alternative food to meat. On Christmas Eve it has become traditional to have opulent and expensive fish dinners! This then contradicts the meaning of abstinence! In my family it is more traditional to have Christmas lunch which normally finishes in the evening. For sure it is never a ‘light’ day ?. Even though Father Christmas (Babbo Natale) brings presents to kids during the night of the 24th December, the most traditional festivity is the Epiphany, on the 6th January. This is when “befana”, an old good witch on her flying broomstick, enters children’s houses through the chimney and fills children’s socks with candies, cookies, chocolate, gifts, etc. if they have been good. She fill socks with coal if they are naughty kids!”

In Brazil, Santa Claus is called “Papai Noel” and “Bom Velhinho” which translates to Good Old Man. Sometimes children will leave a sock close to a window for Papai Noel – if he manages to find it, he’ll exchange it for a present.

Christmas in Brazil takes place during the middle of summer so it is usually very hot – many people go to the beach on Christmas Day.

Brazil is multi-cultural and so there are many different food traditions around the Christmas period coming from many different countries, but some favourite festive meals include pork, turkey, ham, salads served with rice cooked with raisins and “farofa” (seasoned manioc flour), and for dessert, fresh or dried tropical fruits.

Like Brazil, the USA is very multi-cultural and many Christmas traditions depend on the heritage of each family. Certain American traditions have been adopted across the Western World, such as the modern day image of Santa Claus with his white beard and red outfit. In 1931, the American drinks brand Coca-Cola commissioned a Michigan-born illustrator called Haddon Sundblom to develop advertising images of Santa. Sundblom took inspiration from Clement Clark Moore’s 1822 poem “A Visit From St Nicholas”/Twas the Night Before Christmas” and produced the depiction of Santa we know and love today.

We hope you enjoyed reading our round-up of festive traditions around the world, with input from our amazing team members. All that remains is for all of us at Mauve to wish you wonderful Christmas and New Year – we look forward to seeing you in 2020!